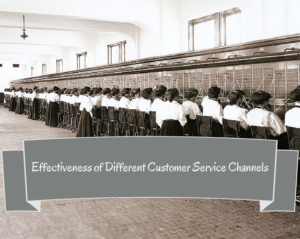 Go back in time only seven years, and social media was an optional marketing extra. Today, it’s possibly the most-significant customer service channel available to your team. Or should that be “customer service channels”? Rather than simply being one facet of the same thing, social media is about a multitude of different ways to interact with your customers. Each brings its own unique advantages, ready to be exploited by the canny customer support team:

Vines have been around for over a year and a half now, which in internet terms is the same as saying “roughly forever”. Yet many companies are still refusing to engage with these looped, six-second video wonders. Partly this may be due to the time-restrictions built-in to the format (after all, 6 seconds isn’t very long), but the effectiveness of a good customer service vine can easily be equal to that of any old media.

A year ago, NatWest created a series of stop-motion vines answering its 20 most-common customer queries. Whenever customers tweeted the brand with one of these 20 questions, instead of getting a copy/paste message they were treated to an animation telling them how to solve their problem. Aside from being a novel way of engaging their Twitter-savvy support base, the vines proved an excellent marketing boost. The team even began branching out into vines designed to answer more ‘unusual’ questions.

By now, Twitter is no longer the new kid on the block, but an old warhorse of the social media world. Since 2007, brands have been aware of the value of a dedicated Twitter account for customer service. But there’s more to Twitter than simply being on standby with a few copy/paste messages. The best brands use it to link with their customers in ways impossible via old media.

Airline JetBlue, for example, are known for their fast-responsiveness to customer queries. Instead of simply apologising for flight delays or posting bland messages, they give each customer a unique reply that suggests the company is really doing something. These replies usually arrive in under an hour. The company are even known to have a ‘crisis team’ on standby just for Twitter, to ensure their response time doesn’t lag on the busiest days. For customers, this creates a quick, safe, reliable and non-frustrating channel for them to deal with the brand directly.

Facebook is still the granddaddy of social media, and a great way to address specific complaints. Like Twitter above, the essence of Facebook customer service is speed. If a customer contacts you at 12:30, ideally you should have a reply up by 12:50 at the latest. Another key factor is personalisation. Just as people using Twitter expecting to be treated as individuals, so do people using Facebook.

Facebook also allows you to keep your customers updated about problems. When Yahoo’s servers crashed badly in December 2013, they used their Facebook page as a transparent means of keeping customers in the loop. Statistics, advice and estimated times for restoring services were all regularly posted, with a team on standby to answer to queries. In short, it was transparent and allowed customers to see the problem being sorted in real-time.

Google Hangouts have been a part of marketing ever since they were first unveiled. But comparatively few brands have also cottoned on to their potential for customer service. One of the only big names to so far embrace Hangouts from a customer support perspective is Dell. To date, the company has hosted dozens of hangouts, with the theme of each one ranging from general troubleshooting, to demonstrating the solution to highly-technical problems.

For Dell, this meant connecting with customers in a new way, while also boosting their credibility among the tech community. From a customer service perspective, the design of Hangouts also allowed them to visually demonstrate complex solutions, instead of merely describing them. Hangouts aren’t for every company, but for those of you who often have to talk customers through a step-by-step process on the phone, they can be an indispensable tool.

With 73 percent of online adults now using social media, exploring new channels of customer service is essential for any modern business. Different channels bring different advantages; but using a combination will allow you to stay at the cutting edge of customer service, and generate plenty of goodwill among your support base. Current stats report that only 2% utilise social channels for customer services, which is low, but it will be on the rise when brands engage more. According to a recent report 87% of user posts on facebook pages are ignored. Brands need to step-up and engage. Social is a powerful tool that enables businesses to provide customer support and assistance but each channel experience needs to be driven by the same metrics.